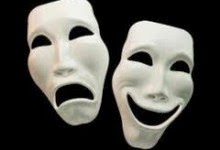 Mania and Hypomania
Mood can be thought of as a spectrum, with depression at the ‘low mood’ end and mania at the other.

Mania refers to periods of over-active, excited behaviour. The fast ideas start coming too fast and there are far too many ... overwhelming confusion replaces clarity ... you stop keeping up with it … memory goes. Infectious humour ceases to amuse. Your friends become frightened ... everything is now against the grain ... you are irritable, angry, frightened, uncontrollable, and trapped.

Hypomania is often described as a milder form of mania. At first when I'm high, it's tremendous ... ideas are fast ... like shooting stars you follow until brighter ones appear... All shyness disappears, the right words and gestures are suddenly there ... uninteresting people, things become intensely interesting. Sensuality is pervasive; the desire to seduce and be seduced is irresistible. Your marrow is infused with unbelievable feelings of ease, power, well-being, omnipotence, euphoria ... you can do anything ... but somewhere this changes.

Although a hypo manic episode is not as severe as full mania, it can still have a serious impact on the way you normally live your life.

For most people, mania or hypomania is experienced as part of bipolar disorder, but this is not always the case.

The following features are associated with mania and also occur in hypomania to a less severe extent:
Ø  Increased energy and activity
Ø  Feeling full of ideas with racing thoughts
Ø  Increased confidence and self-esteem
Ø  Decreased need for sleep
Ø  Talkativeness
Ø  Being easily distracted, and darting from one activity to another
Ø  Elevated mood, but sometimes increased irritability that can quickly turn to anger
Ø  Increased sociability and over-familiarity
Ø  Increased sexual desire and decreased inhibitions
Ø  Increased involvement in pleasurable activities with little thought for consequences, such as going on a spending spree or making reckless financial decisions
Ø  Lack of insight, or denial that behaviour has changed
Ø  Increased awareness of senses such as smell and touch.
Ø  These symptoms are things people may experience from time to time, but for most people will not be considered severe enough to receive a diagnosis or require treatment.

Types
Ø  Bipolar Types
There are several types of bipolar disorder; all involve episodes of depression and mania to a degree. They include bipolar I, bipolar II, cyclothymic disorder, mixed bipolar, and rapid-cycling bipolar disorder.

Ø  Bipolar I
A person affected by bipolar I disorder has had at least one manic episode in his or her life. A manic episode is a period of abnormally elevated mood, accompanied by abnormal behaviour that disrupts life.

Ø  Bipolar II
Bipolar II is similar to bipolar I disorder, with moods cycling between high and low over time. However, in bipolar II disorder, the "up" moods never reach full-on mania.

Ø  Bipolar Spectrum
Learn about the bipolar spectrum, what it means, and how bipolar is categorized.

Causes
Mental health problems are complex and it is generally felt that they develop through a combination of factors rather than one single identifiable cause.

If you had a difficult or abusive childhood, or are going through challenging life experiences such as bereavement, domestic violence or unemployment, you are more susceptible to all mental health problems.

High levels of stress, lack of sleep and stimulants such as drugs or alcohol are common triggers for mania or hypomania; however, on their own, they are unlikely to lead to more than one episode or to more long-term bipolar disorder.

If you experience mania or hypomania as a feature of bipolar disorder, then you might have family members with the same diagnosis, suggesting a genetic link. Many people with the diagnosis, however, have no family history of it, and research has not so far identified a single gene that could be responsible.

Whom to contact for Hypomania  Counseling & Treatment
Dr. Senthil Kumar is well experienced Homeopath & Psychologist who treats many cases such problems  with successful outcomes. Many of the clients get relief after Taking treatment & attending psychological counseling with him. Dr. Senthil Kumar visits Vivekanantha Homeopathy Clinic & Psychological Counseling Center, Velachery, Chennai. To fix an appointment, please call or mail us:

For appointment please Call us or Mail Us