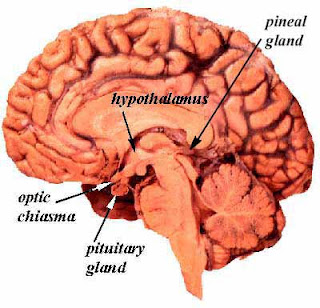 What is the pituitary gland?

The pituitary gland is an endocrine (hormone producing) gland. It is one part of a special messenger system, helping to regulate a wide variety of the body's functions. The pituitary gland helps to control your body's functions by releasing hormones (special chemical messengers) into your bloodstream. These hormones are transported in your blood to their target. Here they usually cause the release of a second hormone. The target can either be specialised endocrine glands or other types of body tissue such as groups of cells.

The pituitary gland is often called the 'master' gland because it controls several other hormone releasing glands such as the ovaries, adrenals and testes.

Where is the pituitary gland found?

The pituitary gland has two main parts: the anterior (front) pituitary and the posterior (back) pituitary. These two parts release different hormones targeting different parts of the body.


How does the pituitary gland work?

Your body is in a constant state of change. Your heart rate, blood pressure and body temperature all change in response to what you do and your surroundings. Your body has special systems that constantly monitor these and other vital functions. Not only must these systems monitor changes, they must also respond and help the body restore balance. One of these systems involves the hypothalamus and the pituitary gland.

The pituitary gland hormones may then stimulate their target endocrine glands to produce their own hormones. These locally produced hormones do the actual work of regulating your body. For example, hormones produced by the thyroid increase the body's metabolic rate. In some cases high levels of locally produced hormones stop the hypothalamus and pituitary releasing more of their own hormones. This principle is called 'negative feedback', and it prevents hormone levels from rising too high.


Some disorders of the pituitary gland