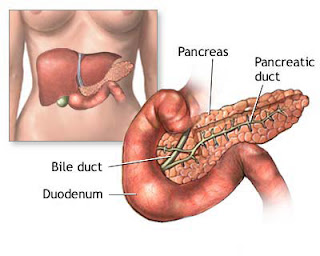 The pancreas is an organ the upper abdomen. Enzymes (chemicals) made by cells in the pancreas pass into the gut to help digest food. The hormones insulin and glucagon are also made in the pancreas and help to regulate the blood sugar level.


What is the pancreas?

The pancreas is an organ in the upper abdomen. It is about the size of a hand

Where is the pancreas found?

The pancreas is in the upper abdomen and lies behind the stomach and intestines (guts). The pancreas has a connection to the duodenum (the first part of the gut, which is connected to the stomach) via a duct (tube). This connecting duct allows the enzymes produced by the pancreas to pass into the intestines.

What does the pancreas do?

The pancreas has two main functions:
About 90% of the pancreas is dedicated to making digestive enzymes. Cells called acinar cells within the pancreas produce these enzymes. The enzymes help to make proteins, fats and carbohydrates smaller. This helps the intestines to absorb these nutrients. The acinar cells also make a liquid which creates the right conditions for pancreatic enzymes to work. This is also known as pancreatic juice. The enzymes made by the pancreas include:
Approximately 5% of the pancreas makes hormones which help to regulate your body’s metabolism. These hormones are made by several different cells which clump together like little 'islands' (islets) within the pancreas. The islets are called ‘islets of Langerhans’ and there are about one million islets dotted about in an adult pancreas. The hormones produced by the cells in the ‘islets of Langerhans’ within the pancreas include:

How does the pancreas work?

The digestive enzymes produced by the pancreas are controlled by the body’s nervous system and its hormones. When the body senses food in the stomach, electrical signals are sent via nerves to the pancreas. These signals stimulate the pancreas to put more enzymes into the pancreatic juice. Acinar cells respond by increasing the amount of enzymes they produce. The enzymes leave the cells and pass into tiny ducts (tubes). These ducts join together like branches of a tree to form the main pancreatic duct. The pancreatic duct drains the enzymes produced into the duodenum (the part of the gut just after the stomach).

The enzymes are made in an inactive form so that they don’t digest the pancreas itself. Once they enter the intestines the enzymes are activated and can begin breaking food down.

The main hormones released by the pancreas are insulin and glucagon. These hormones help to regulate the amount of sugar found in the blood and the body’s cells. The body’s cells need energy to function. The most readily available form of energy is glucose, a type of sugar. Insulin helps to take glucose from the blood into the cells themselves. This allows the cells to function properly. Glucagon stimulates cells in the liver to release glucose into the blood when levels are low.

Some disorders of the pancreas

Cancer of the pancreas

There are various types. The common type is called ductal adenocarcinoma of the pancreas and arises from cells of the pancreatic duct. This mainly occurs in people over 60. There are some rare types of cancer which arise from other types of cells within the pancreas. For example, cells in the pancreas that make insulin or glucagon can become cancerous ('insulinomas' and 'glucagonomas').

This is when the pancreas becomes inflamed over a short time - within a few days or so. It causes abdominal pain. It usually settles in a few days but sometimes it becomes severe and very serious. The usual causes are gallstones or drinking a lot of alcohol.

This is when the inflammation in the pancreas is persistent. The inflammation tends to be less intense than acute pancreatitis but, as it is ongoing, it can cause scarring and damage. This can cause abdominal pain, poor digestion, diabetes and other complications. Drinking a lot of alcohol over a number of years is the common cause.

With type 1 diabetes the pancreas stops making insulin. It is treated with insulin injections and a healthy diet.
Posted by Vivekananda Homeopathy Clinic & Psychological Counseling Center at 11:15 PM