All About Blood - Must Read 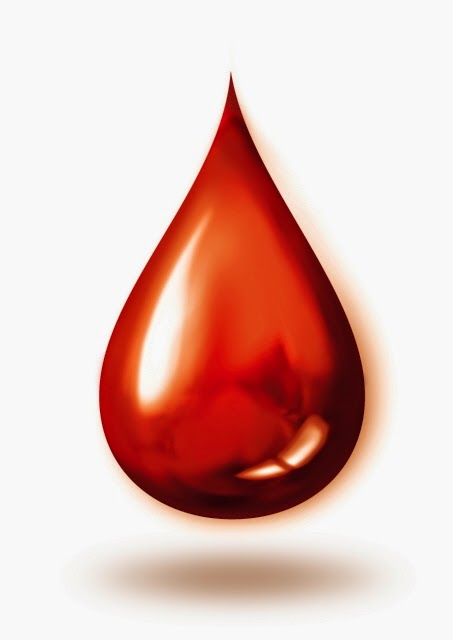 What Is Blood
Blood is essential for good health because the body depends on a steady supply of fuel and oxygen to reach its billions of cells. Even the heart couldn't survive without blood flowing through the vessels that bring nourishment to its muscular walls. Blood also carries carbon dioxide and other waste materials to the lungs, kidneys, and digestive system; from there they are removed from the body.
Blood carries gases, nutrients and waste products through the body. Blood also fights infections, heals wounds and performs many other vital functions. There is no substitute for blood. It cannot be made or manufactured. Donors are the only source of blood for patients who need it.
One unit of blood can be separated into components: red blood cells, white blood cells, plasma, platelets and cryoprecipitate
Without blood, we couldn't keep warm or cool off, we couldn't fight infections, and we couldn't get rid of our own waste products.

Functions of Blood
The blood is a vital organ which supplies oxygen, food and other essential nutrients, hormones and chemicals to cells throughout the body. It serves as one of the body’s most effective defenses against infection, and it also helps in the removal of toxins and other waste materials.
1. Transports:

4. Removes toxins from the body

Composition of Blood
Whole blood is made up of many components, with each component performing a specific role in the blood’s overall functions. The three main blood elements involved in leukemia are the red cells, clotting cells and white cells which are formed in the bone marrow and lymph nodes and circulate through the bloodstream in a clear fluid plasma.
Red Blood Cells (Erythocytes) contain hemoglobin, an iron rich protein which picks up oxygen as the blood passes through the lungs, transports it, and releases it to organs and tissues throughout the body. A shortage of these red cells, a condition known as anemia, can cause weakness, dizziness, shortness of breath, headaches and irritability.
Clotting Cells (Platelets) are tiny disc-shaped cells which help prevent abnormal or excessive bleeding by forming clots. A deficiency of platelets can cause bleeding of the mucous membranes or other tissues, such as the skin. Unexplained or excessive bruising is characteristic of a platelet deficiency.
White Blood Cells (Leukocytes) play a major role in defending the body against disease producing bacteria, viruses and fungi. There are three main types of leukocytes, with each type performing a specific infection-fighting function.
Monocytes defend the body against bacterial infection.
Granulocytes include neutrophils, eosinophils and basophils. Neutrophils are the predominant type, counting for about 60 percent of all circulating white blood cells. They combat infection by rapidly increasing in number, engulfing and destroying foreign substances. They then die and, in turn, are ingested by monocytes. Once an infection is under control, production of neutrophils returns to the original preinfection count and steady state. Eosinophils and basophils also play infection fighting roles.
Lymphocytes consist of two types of cells which combine forces to create a complex interaction to regulate the immune response. T cells attack virus-infected and malignant cells. B cells produce and release antibodies, or protein substances, which bind to infectious agents and help prevent them from doing damage to the body. A deficiency in any type of normal white blood cell may result in an increased susceptibility to infections.

Blood Cell Growth
The blood, like all human tissues and organs, is composed primarily of cells which are developed enough to perform efficiently. The red, white and clotting cells enter the bloodstream after the maturation process called hematopoiesis, which begins with the production of immature cells in the blood-forming tissue of the bone marrow, spleen or lymph nodes. Actually, only a small percentage of cells are produced in the spleen and lymph nodes. The majority of cells originates and matures in the bone marrow - the spongy meshwork interior which fills the cavities of the large bones.
Blood cells grow in the same general manner as all other human cells. Tissues or organs of the body contain a pool of immature, or undifferentiated cells known as stem cells. These cells begin to divide and mature until they become fully developed, or differentiated cells.
The original cells involved in blood cell production are called pluripotent stem cells, meaning that they contain the characteristics of all the different cell types which make up the major blood cell lines. One of these lines is known as the myeloid line which produces the white cells called monocytes and granulocytes. Another is the lymphoid line which produces lymphocytes. As cells mature, they are released into the blood stream to replace those which have become old and worn out.
Blood cells are not released from the bone marrow until they are "mature enough" to perform efficiently. Normally, immature cells or "blasts" are not present in the bloodstream. A relatively small amount of these cells are contained in the bone marrow, still involved in the growth process. However, blasts normally never constitute more that 5 percent of the bone marrow cells.
The entire blood cell reproduction, maintenance, and destruction cycle is really a highly efficient and orderly process. The abnormal and excessive reproduction of any type of cell obviously disrupts the delicate blood cell balance necessary to sustain the body’s general well-being.

Blood grouping system (ABO)
According to the AB0 blood group system there are four different kinds of blood groups: A, B, AB or 0 (null).

How to donate blood

Make an Appointment
Ø  It always helps us to know in advance when you are coming in to make a donation.

Hydrate
Ø  Be sure to drink plenty of fluids the day of your donation.

Maintain a Healthy Level of Iron in Your Diet before Donating
Ø  If possible, include iron-rich foods in your diet, especially in the weeks before your donation.

Bring a List of Medications You Are Taking
Ø  The blood bank staff may need to know about any prescription and/or over the counter medications that may be in your system.

Bring an ID
Ø  Please bring either your donor card, driver's license or two other forms of identification.

Bring a Friend
Ø  Bring along a friend, so that you may both enjoy the benefits of giving blood.

No Tension - feel relax!
Ø  Blood donation is a simple and very safe procedure so there is nothing to worry about.


The Donation Process Step by Step – International standards
Donating blood is a simple thing to do, but it can make a big difference in the lives of others. The donation process from the time you arrive until the time you leave takes about an hour. The donation itself is only about 8-10 minutes on average.

The steps in the process are

What to do after your donation

Enjoy the feeling of knowing that you helped save lives!


Why blood is vital even for the dying
Everyone knows blood is literally a lifesaver for those who’ve been in an accident or need it to help survive treatments and operations. But for some, whose illness has no cure and that last battle they face just can’t be won, a blood transfusion can help to improve their quality of life during their final months, weeks or even days.

"These vital transfusions give patients a better quality of life. It gives them the energy and ability to enjoy this precious, final time with their families."

But this time is often a gift that only blood can provide. In some serious accidents, its use can mean that a critically ill patient can stay alive long enough for their loved ones to reach the hospital to see them, one last time.


How Blood banks use Blood?

Misconceptions and Fear about blood donation


"I am afraid to give blood"

"Other people must be giving enough blood"

"My blood is not the right type"

"They wouldn't want my blood because of illness I've had"

"I don't have any blood to spare"

"I am afraid of being turned down"

"You'll take too much and I'll feel weak"

==--==
Posted by Vivekananda Homeopathy Clinic & Psychological Counseling Center at 7:11 AM